Justice was around two years old when he was found wandering the streets of Indiana. Rescuers were horrified to see that his body was covered with severe burns. Investigators think that someone intentionally doused her with chemicals causing the injury.

The stray dog was immediately brought to the Shelby County Animal Shelter where he was given the medical attention that he required. His poor body was wrapped in bandages, and he was given numerous medications. The shelter staff regularly cleaned and replaced his bandages to prevent any infection.

For one whole year, Justice underwent medical care and training before he was deemed ready to be adopted.

Although the dog’s appearance never fully went back to when he was healthy, there was still a lot of improvement. Some of his furs grew back, and his skin healed. But it was his character that made a lot of transformation.

When Justice was brought in, he was very reserved and terrified of everything. But after experiencing the love and care of the shelter staff, he transformed into a happy and more confident pooch. The homeless pooch has a lot more energy now and initiates interaction with both humans and dogs.

When he was put up for adoption, hundreds of applications came in, even from other countries. But because of his condition and continuing treatment, they had to choose someone who was, at most, a hundred miles away only.

Within a couple of days, they found the perfect family for him. The dog became comfortable living in his new home and has shown signs that he trusts his new family. This is not an easy feat for a dog that has been severely abused in the past.

The authorities are still investigating the case. They haven’t discovered who was responsible for Justice’s injuries. They even put up a huge reward for any information. There is still not enough proof to convict anybody.

Hopefully, the case will be solved soon, and Justice gets, well, justice for the cruel act done on him. 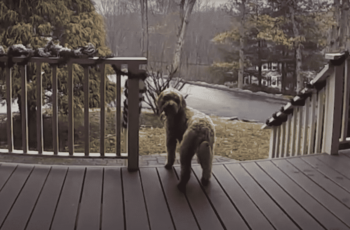